The Household Cavalry Mounted Regiment, mounted on immaculately groomed horses with breastplates shinning in the sun, present a stirring sight as they ride through the streets of London to change 'The Queen's Life Guard' on Horse Guards Parade.

Life Guards have stood guard at Horse Guards, the official entrance to St James and Buckingham Palace, since the Restoration of King Charles II in 1660.

The New Guard leaves Hyde Park Barracks at 10:28 weekdays and 9:28 on Sundays to ride to Horse Guards Parade via Hyde Park Corner, Constitution Hill and The Mall on their way to the guard change ceremony.

Although Changing The Queen's Lifeguard is not as well known as Changing the Guard at Buckingham Palace smaller crowds and no railings between you and the men and horses taking part make it ideal for those with younger children and those looking for some amazing pictures.

The ceremony lasts about half an hour, and the mounted sentries change every hour, or half hour in very cold weather during the day until 16:00 when a dismounting ceremony takes place.

The Queen's Life Guard change daily on Horse Guards Parade at 11:00 weekdays and 10:00 on Sundays.
Always check the confirmed dates as State Occasions or other ceremonial duties sometimes lead to changes in the schedule.

The Old Guard forms up on the North side of the enclosure in Horse Guards.

When the New Guard arrives the trumpeters of both the Old and New Guard sound a Royal Salute.

When both Guards have formed up in the enclosure, the Corporal Major, and the sentries of the first relief of the New Guard leave for the Guard Room.

When the Old Guard departs the trumpeters again sound a Royal Salute.

The New Guard then ride through the arch where they will dismount and the horses led to their stables.

Note: The Standard and trumpeters only parade with a Long Guard.

A 'Long Guard' is mounted when the Queen is in residence, at Buckingham Palace, the Long Guard is made up of an Officer, a Corporal Major,who carries the Standard, two Non-Commissioned Officers, a Trumpeter and ten Troopers.

A 'Short Guard' is mounted when the Queen is not in residence at Buckingham Palace the Short Guard is made up of two Non-Commissioned Officers and ten Troopers.

Should The Queen leave London while the Guard is mounted or, having been away, return to Buckingham Palace, the Guard is 'made up' or "masde down" to suit. 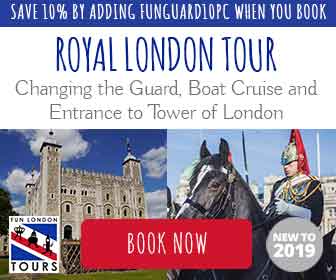 The Four 'O' Clock Parade, also known as the Dismount Parade or Punishment Parade, takes place daily in the courtyard of Horse Guards.

The Life Guards are under orders to bar the entrance of all carriages and cars through the Arch of Horse Guards, unless the traveler is in possession of, and be able to produce, an Ivory Pass, only the Royal Family is exempt from this rule.

Horse Guards Parade, is a large parade ground off Whitehall in central London.

As well as being the venue for changing The Queen's Life Guard it is also the location for Trooping the Colour, which commemorates the Queen's Birthday, and Beating Retreat.

Getting To Horse Guards