Trooping the Colour, timetable and where you can watch The Queen's Birthday Parade without tickets.

The timings on this page apply to the The Queen's Birthday Parade, the Colonel's Review and the Major General's Review.

Please Note: The Gun Salute, Balcony appearance by the Royal Family, and Fly Past only take place on The Queen's Birthday Parade.

The Queen's Birthday Parade, is the highlight of the military ceremonial calendar in London and attracts large crowds, meaning you need to get to The Mall early if you want to get a good spot to watch the proceedings.

Scroll down this page for timings and where you can watch the parades... 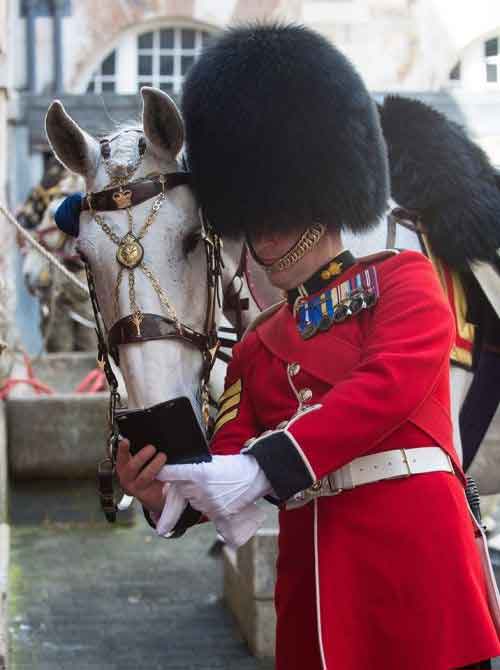 10:45 - Her Majesty The Queen leaves Buckingham Palace in a grand procession escorted by the Household Cavalry.

The Queen then reviews Her Guards riding slowly down the ranks of foot guards and cavalry in a carriage.

During the parade The Colour is Trooped through the ranks before the Foot Guards march past The Queen.

Then the Household Cavalry and Kings Troop Royal Horse Artillery rank past.

12:20 - HM The Queen, at the head of Her Guards, returns up The Mall to Buckingham Palace.

12:20 - HM The Queen, at the head of Her Guards, returns up The Mall to Buckingham Palace.

At the gates of Buckingham Palace HM The Queen dismounts from the carriage and mounts a dais to watch the parade march past in salute.

12:55 (approximately) - HM The Queen and other members of the Royal Family make a balcony appearance at Buckingham Palace.

Those without tickets to the seated stands on Horse Guards Parade can watch the procession from The Mall or from the corner of St James's Park.

The view from the corner of St James's Park, marked in orange, can be restricted by the troops and horses on parade.

Personally I would suggest heading for The Mall, on the St James's Park side, and take up a position close to the junction with Marlborough Road.

Wherever you choose you can be sure of seeing one of the finest spectacles in London and having a day out to remember.

Restrooms and refreshments can be found in St James's Park.

About Trooping the Colour

Over 1400 officers and men, two hundred horses and the Massed Bands of the Household Division can be seen on parade at The Queen's Birthday Parade.