Looming over the town and surrounding countryside Windsor Castle is the oldest and largest continuously inhabited castle in the world and one of the Queen's three official residences.

Since the 11th century, the castle has been home to 39 monarchs who have shaped the castle into what is reputed to be 'The Queen's' favourite official residence.

As well as the home where 'The Queen' spends most weekends Windsor Castle is very much a working royal palace which is regularly used for State and ceremonial occasions.

The site was chosen by William the Conqueror as it was only one day's march from the Tower of London and because it provided a good defence against attack from the west.

A visit to Windsor Castle, which has been the family home of British Kings and Queen's for over 900 years, is an awe inspiring experience. 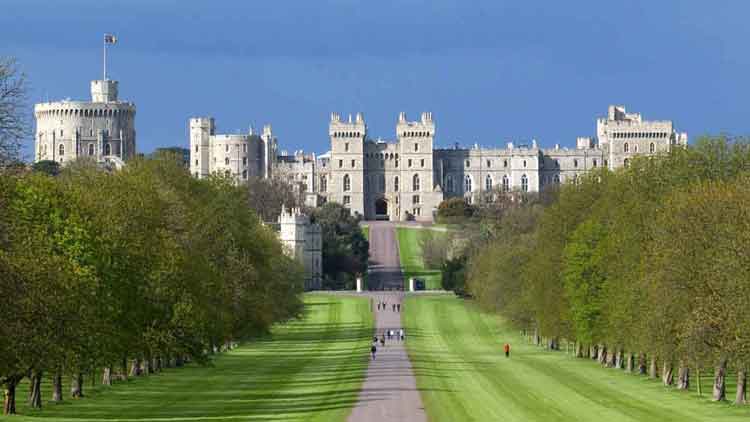 A tour of Windsor Castle lets you to follow in the footsteps of British Royalty.

After passing through an airport style security check and getting an introduction to the castle you will walk past the moat of the Round Tower, (not open to the public), up to the north terrace, where the entrance to the State Apartments is situated.

From the north terrace you get spectacular views, of the surrounding countryside and the Thames meandering past Windsor, which looks a lot smaller from this vantage point high above the town.

At the roped off entrance you can choose to head directly into the State Apartments or start with a visit to the Dolls' House.

Queen Mary's Dolls House, is the largest and most famous dolls house in the world.

Built between 1921 and 1924 it is an exquisite palace in miniature whose tiny rooms ,filled with the work of the finest artists, artisans, craftsmen and manufacturers, give a glimpse into a bygone age.

The State Apartments, follow, furnished with treasures from the Royal Collection and displays of weaponry, including spirals of pistols and the suit of armour worn by King Henry VIII.

The restoration work carried out, after the fire in 1992, bring alive what the original rooms would have looked like on completion.

The Semi State Rooms,are used by The Queen for hosting her guests.
These spectacular richly decorated private apartments are open to visitors in the winter months.

St George's Chapel, a living church where services are held every day, is also home to the Order of the Garter the oldest British Order of Chivalry.

Ten sovereigns, including Henry VIII, his third wife Jane Seymour, and Charles I are laid to rest in the Chapel.

St Georges Chapel is closed to general visitors on Sundays, but worshippers are welcome to attend the services.

Precinct Tour, these guided tours with one of the Castle Warden's, which are included in the ticket price, are a great way to get even more out of your visit to Windsor Castle.

Guided tours of the Precincts,which are included in the ticket price, depart at half-hourly intervals from the Courtyard and last 30 minutes.

A complimentary audio tour, included in the ticket price, lets you visit the State Apartments, the Drawings Gallery, Queen Mary's Dolls House and St George's Chapel at your own pace.

Want to watch the Windsor Castle Guard change at 11:00 and still avoid the morning rush?

Then, after watching the Guard Mount, get your ticket stamped for re-entry and explore Windsor High Street where you can grab an early lunch, as once the coach tours depart the Castle and State Apartments are a lot less crowded.

As Windsor Castle is a working royal palace, sometimes the entire Castle or the State Apartments within the Castle need to be closed at short notice.

Windsor Castle will be completely closed on:

Note: When the State Apartments are closed the Semi-State Rooms will not be open.

The Chapel will have different opening times on:

As a working royal palace, Windsor Castle is used frequently by The Queen for State ceremonies and official entertaining.

Things you need to know

Courtesy of the Royal Collection Trust

The oldest parts of Windsor Castle were built by the Normans, in wood, following the victory of William the Conqueror in the Battle of Hastings in 1066.

Henry I was the first monarch to use Windsor Castle as a home and it is during his reign that the wooden keep and walls were replaced with stone.

Edward III was born in Windsor Castle in 1312 and during his reign spent a vast amounts of money, funded by his military victories in France, adding to and improving Windsor Castle in what was the most expensive secular building project in England during the Middle Ages.

King Henry VIII who regularly stayed at the castle is buried in the Windsor Castle Lady Chapel.

Queen Victoria and Prince Albert made Windsor Castle their main place of residence. Following Albert's death, Queen Victoria was sometimes referred to as the Widow of Windsor. 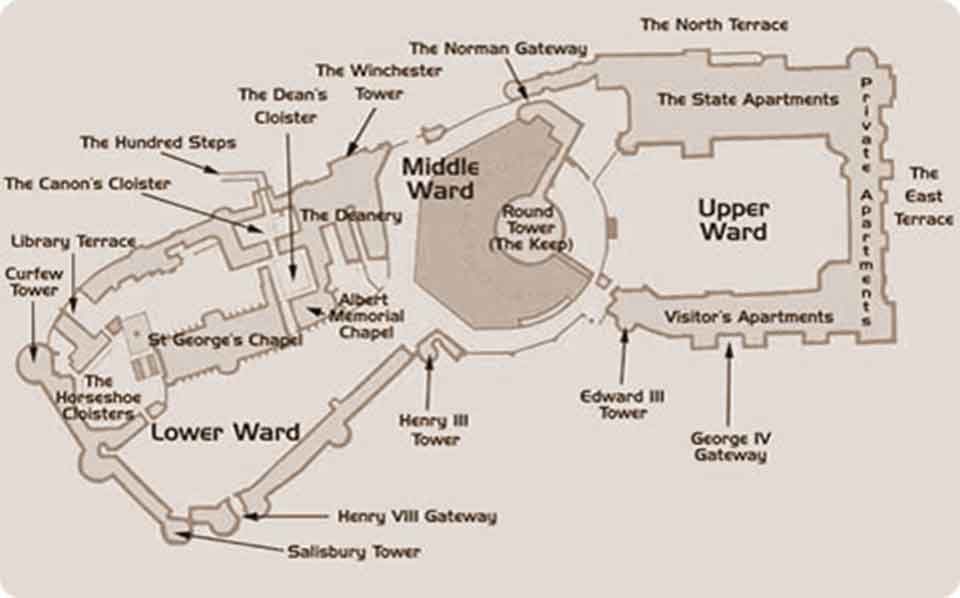 Disaster struck on 20th November 1992 when a curtain in the Queen's private chapel was ignited by a spotlight which had been accidentally pressed up against it.

The fire raged for over nine hours, and despite the efforts of 200 firefighters battling against the flames was not finally extinguished until the early hours of the following morning, some fifteen hours later. 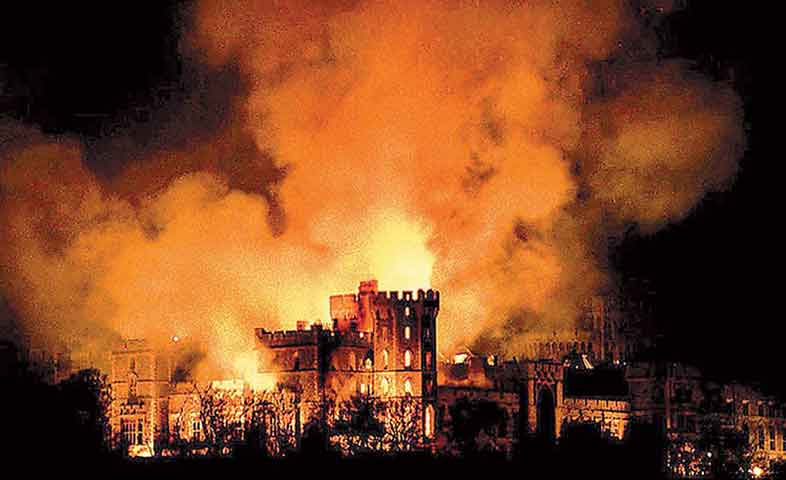 Despite soaking the crumbling structure in 4,500 tons of water, nine rooms were completely gutted and nearly 100 suffered significant damage, by what remains the worst blaze in the castle s 900-year history.

Members of the Royal Family, including the Queen and Prince Andrew, were reported to have joined a human chain tasked with saving great works of art from the wreckage.

A Restoration Committee, headed by the Duke of Edinburgh and the Prince of Wales, was set up to oversee the repair work.

The committee decided that certain principle rooms destroyed by the fire - the Grand Reception Room, the State Dining Room, and two Drawing Rooms - should be restored to their former state.

The restoration of the State Apartments brings alive how the original rooms would have looked and have arguably improved the visitor experience.

It was this this disastrous fire that led to the opening of the State Rooms at Buckingham Palace as Her Majesty The Queen had agreed to fund 70% of the restoration costs.

Getting to Windsor Castle

From London you can get to Windsor from both Waterloo and Paddington stations.

Trains from Paddington to Windsor Central depart every 10 to 15 minutes throughout the day.
The journey takes about 35 minutes. You have to change trains at Slough.

Greenline bus number 702 leaves from Victoria Colonnades, near London Victoria Coach Station every half hour, approximately, during the day. The journey takes about an hour.

Windsor is accessible via the major motorway networks of the M3, M4, M25 and M40

The journey time from London is approximately 40 minutes and Heathrow airport is about 15 minutes away.

Parking throughout Windsor is controlled and quite expensive.

Consider the Long Term parking if you are visiting Windsor Castle as a 20 minute walk saves about a third of the cost of short term parking in Windsor centre.

Coach tours and open dated tickets to Windsor Castle are available through Visit Britain, the official shop of the British Tourism Authority.
These tours include entry tickets to the Castle.

All visitors should be aware that the Castle is situated at the top of a steep hill and there are long distances that have to be covered on site.

All visitors who require an access companion receive a complimentary ticket.

More Palaces and Castles to Visit

More Royal Palaces and Castles in the UK you can visit and experience first hand the rich history of some of the of the world's most iconic buildings.