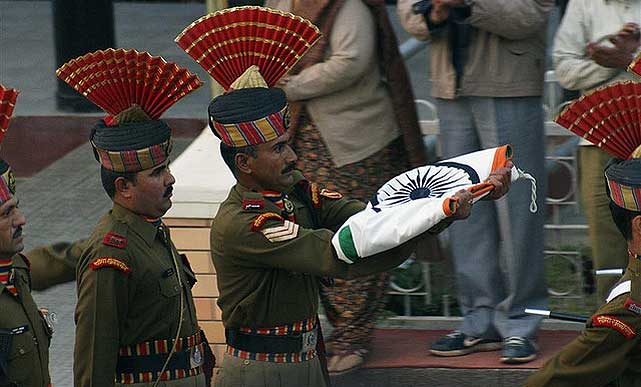 Today I went to see the changing of the guard at the Pakistan - India border. We hired a car for R200 to take us there and back. It's only 30km or so away from Amritsar but the drive took over an hour.

The ride out to the border was hectic in town and then gave way to large, open, green fields and farms. We passed several military buildings, but I was wrong, we weren't anywhere near the border at this point.

20 minutes later we were there with a kilo meter left to walk. We hurried down the road, me especially, since we knew there wasn't assigned seating.

We got there and we separated. I was not pleased, being forced to sit on the women's side. Then I realized that the men's side had a fence while we had a wussy little rope. And then men's side was packed while I could get down to the second row. Followed by the first row, followed by down on the street. Heh heh heh.

I looked over towards the Pakistani side and could see that their bleachers had only a few people in them. The 20 women there were brightly dressed... from head to toe. And FAR away from the men. Of whom there were less than 100.
Compared to the full Indian side, this looked pretty pathetic.

The Indian side had 2 full sections of men and an almost full section of women. India was loud, boisterous, enthusiastic, and full of patriotism. Pakistan.... we couldn't even hear them. People were standing and cheering, the women were dancing in the street (before the ceremony started), and then pushing our ways forward until the guards would indicate we should settle down. Which we would... and then start up again. The men never settled down.

Both sides had MC's with microphones (but I never heard the Pakistani one) who would yell things at the crowd to get us excited, in Hindi.

Then the guards showed up, lined up smartly in their uniforms, and then the first ran down the road toward the gate to take over, and he moved fast.

At the end he kicked his legs high above his head, did a move that made me think he was dancing and mocking Pakistan at the same time, and then took his post, sending the other man back.

The other man also marched at warp speed, did the kick dance for us, and then disappeared. The remaining soldiers all did the same thing and the change was over.

The new guards and the Pakistani new guards all had a face-off of sorts and actually mingled briefly. Then they took down the flags of both countries and marched back with that as well.

Then there was a lot of cheering. The border was closed, the gate locked, ropes put up, and people poured into the street to take pictures and dance and celebrate.

I managed to get a few pics through the gate of Pakistan (now I can tell people I've seen Pakistan!). I'm glad I was on this side of the fence.

Read more about the travels of Kris on travel blog.

Your Changing the Guard Experiences

Changing Guard welcome articles on your experiences and opinions about the guard change or military ceremonies you have seen either in your own country or on your travels around the world. 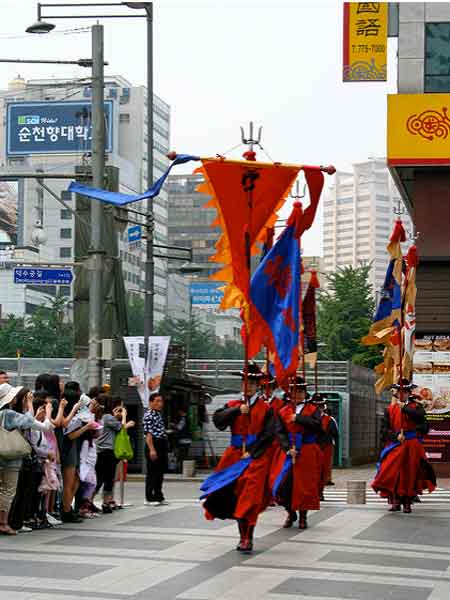 To add information about a changing of the guard ceremony, or suggest edits to those listed please contact us.

Views and opinions expressed in submitted articles are those of the author and do not necessarily reflect those of Changing-Guard.com.