The Tomb of the Unknown Soldier, also known as 'The Tomb Of The Unknowns, in Arlington National Cemetery is the place to be, to see a Changing of the Guard ceremony, in the USA.

Changing The Guard At The Tomb Of The Unknowns

The Tomb of the Unknowns is a monument dedicated to American service personnel who have died without their remains being identified.

The Guards of Honour at the Tomb of the Unknowns, known as the Old Guard' honour all fallen American service personnel who are ' Known But to God.'

The impeccably uniformed guards wear Army Dress Blue Uniform and always bear their weapon away from the Tomb as a gesture against intrusion on their post.

From October 1st to March 31st the guard is changed every hour on the hour.
From April 1st through September 30th, another change is added on the half hour and the cemetery closing time moves from 17:00 to 19:00.

A relief commander appears on the plaza to announce the Changing of the Guard.

Shortly after a new sentry leaves the Quarters, he unlocks the bolt of his or her M-14 rifle to signal the relief commander to start the ceremony. 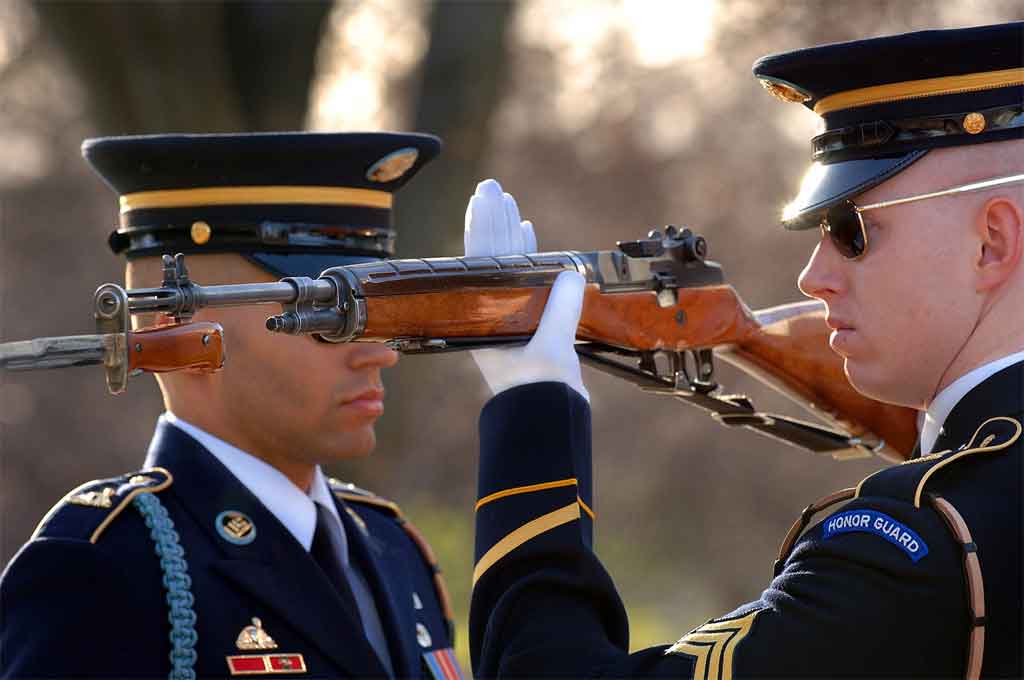 The relief commander walks out to the Tomb and salutes, then faces the spectators and asks them to stand and stay silent during the ceremony.

Following a detailed white-glove inspection of the weapon, checking each part of the rifle, once complete the relief commander and the new sentry meet the retiring sentry at the centre of the matted path in front of the Tomb.

All three salute the Unknowns, who have been symbolically given the Medal of Honour.

The relief commander then orders the relieved sentry to; "Pass on your orders." The newly posted sentry replies, "Orders acknowledged," and steps into position on the black mat.

When the relief commander passes by, the new sentinel begins walking at a cadence of 90 steps per minute.

While on duty the sentry crosses a 63-foot rubber surfaced walkway in exactly 21 steps. He then faces the Tomb for 21 seconds, turns again, and pauses an additional 21 seconds before retracing his steps.

The number twenty-one was chosen because it symbolizes the highest military honour that can be bestowed - the 21-gun salute.

The duties of the sentries are not purely ceremonial, they will confront people who cross the barriers at the tomb or who are disrespectful or loud.

Traditionally known as 'The Old Guard,' the 3rd U.S. Infantry Regiment is the official ceremonial unit, of the US Army.

They escort the President, and provide security for Washington, D.C. in time of national emergency or civil disturbance. 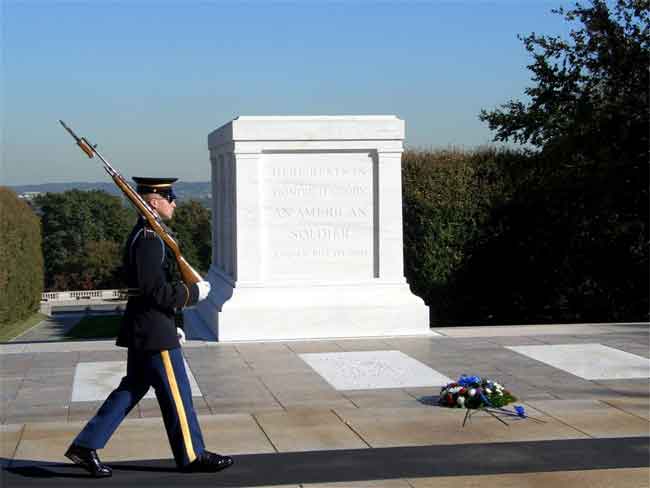 The unit received its unique name from General Winfield Scott during a victory parade at Mexico City in 1847 following its valorous performance in the Mexican War.

Fifty campaign streamers attest to the 3rd Infantry's long history of service, which spans from the Battle of Fallen Timbers to World War II and Vietnam.

Since World War II, The Old Guard has served as the official Army Honor Guard and escort to the president. In that capacity, 3rd Infantry soldiers are responsible for the conduct of military ceremonies at the White House, the Pentagon, national memorials and elsewhere in the America's capital.

In addition, soldiers of The Old Guard maintain a 24-hour vigil at the Tomb of the Unknowns, provide military funeral escorts at Arlington National Cemetery and participate in parades at Fort Myer and Fort Lesley J. McNair.

Arlington National Cemetery is located across the Potomac River from Washington, D.C. at the end of Memorial Avenue, which extends from Memorial Bridge.

Arlington is accessible from the major roadways in the D.C. area: Interstate 95, the Capital Beltway (I-495), the George Washington Memorial Parkway and the Baltimore-Washington Parkway (I-295).

The cemetery is also a stop on the Washington Transit Authority’s Metrorail system.

Arlington Cemetery station, on Metro's Blue line, is a short walk from the Welcome Center.