In June each year Trooping the Colour, also known as 'The King's Birthday Parade', takes place on Horse Guards Parade in London.

With Her Majesty the King taking the salute Trooping the Colour is the highlight of the ceremonial calendar with over 1400 officers and men, two hundred horses and the Massed Bands of the Household Division on parade.

Prior to the King's Birthday Parade two Trooping the Colour Reviews take place, the first is 'The Major General's Review' and then 'The Colonel's Review'.

Britain will celebrate Her Majesty Queen Elizabeth II s 70 years on the throne with four days of festivities beginning with her ceremonial birthday parade.

Trooping the Colour Review by the Duke of Cambridge 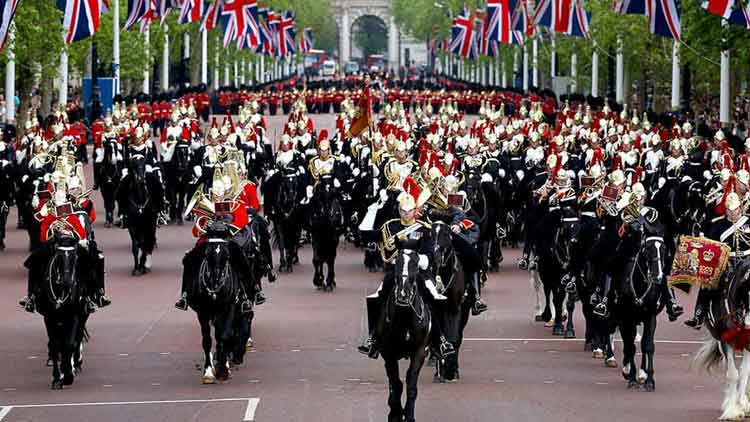 History of Trooping the Colour

The custom of Trooping the Colour was introduced in 1805. However, due to the illness of King George III, it was suspended from 1811 to 1820.

The ceremony was restored on the accession of King George IV and has become the highlight of the ceremonial calendar ever since.

Queen Elizabeth II attended Trooping the Colour every year of her reign, except in 1955 when a national rail strike resulted in the event being cancelled.

In 2020 due to the COVID-19 pandemic the 1st Battalion Welsh Guards with a composite Band, comprising of two Directors of Music and 40 other ranks was drawn from the Bands of the five regiments of Foot Guards, who with six drummers from 1st Battalion Welsh Guards forming the rear rank paraded in front to Her Majesty The Queen inside Windsor Castle. (The Queen’s Official Birthday 2020 Video)

In 2021 it was again staged inside Windsor Castle, due to COVID restrictions, and although smaller than the traditional Trooping the Colour,it incorporated many of the elements from the annual ceremonial parade on Horse Guards. (Pictures & Video)

F Company Scots Guards Trooped the Colour of the 2nd Battalion Scots Guards in the Castle Quadrangle where they were joined by the The King's Troop Royal Horse Artillery, Two Divisions and a Standard Party of the Household Cavalry Mounted Regiment the Number 2 Guard was found by Nijmegen Company Grenadier Guards, Number 3 Guard found by 1st Battalion Coldstream Guards and. Number 4 Guard found by 7 Company Coldstream Guards.

Accompanied by a Massed Band of the Household Division and the 1st Battalion Scots Guards Pipes and Drums the parade culminated in a fly past by the Red Arrows and at 12 noon The King's Troop Royal Horse Artillery fired a 41 Gun Royal Salute from East Lawn to mark Her Majesty’s official birthday.

The King travels down The Mall from Buckingham Palace, by carriage, with a Sovereign's escort from the Household Cavalry Mounted Regiment.

As the clock on Horse Guards chimes eleven Her Majesty The King arrives to take the Royal Salute from the officers and men of the Household Division on parade.

After the salute The King rides up and down the ranks, in her carriage, inspecting the troops on parade.

After the massed bands have performed a musical 'troop' the Regimental Colour, being trooped, is escorted up and down the ranks of Guards.

The Foot Guards and the Household Cavalry then march past Her Majesty, and The King's Troop, Royal Horse Artillery, rank past with their Guns.

The King, in a carriage, rides back to Buckingham Palace at the head of her Guards, before taking the salute from a dais in front of the Palace railings as the troops march past on the way to their barracks.

Her Majesty The King joins other members of the Royal Family on the balcony of Buckingham Palace to watch a fly-past by the Royal Air Force at 1 'o' clock.

Note: There is no fly past for either the Major General's or The Colonel's Review.

Trooping the Colour originated from traditional preparations for battle when a Regiment's Colour was carried, or "trooped", down the ranks so that they could be seen and recognised by the soldiers who would use them as a rallying point in the confusion of battle. 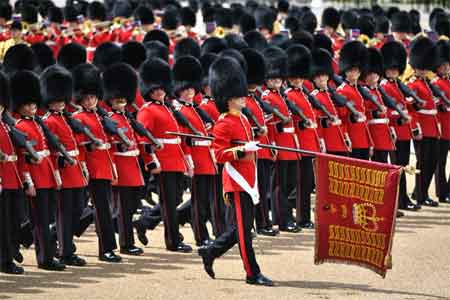 For those visiting London in May it is always worth checking the Dates for Changing the Guard to see if the New Guard is scheduled to mount from Horse Guards. (Dates published in the Changing the Guard and Ceremonial Events Calendar as soon as they have been confirmed).

A Horse Guards Mount, (HGM), indicates a rehearsal for Trooping the Colour is scheduled to take place and that the New Guard, led by a Regimental Band, will march from Horse Guards up The Mall to Buckingham Palace to the Changing of the Guard Ceremony at the end of the rehearsal.

There are normally four rehearsal each year and although Horse Guards is cordoned off you can watch from the corner of St James's Park.

The Trooping the Colour parade route extends from Buckingham Palace along The Mall to Horse Guards Parade, and back again.

Those without tickets, to the seated stands, can choose a spot on The Mall or on the edge of St James's Park overlooking Horse Guards to watch the parade from the sidelines. 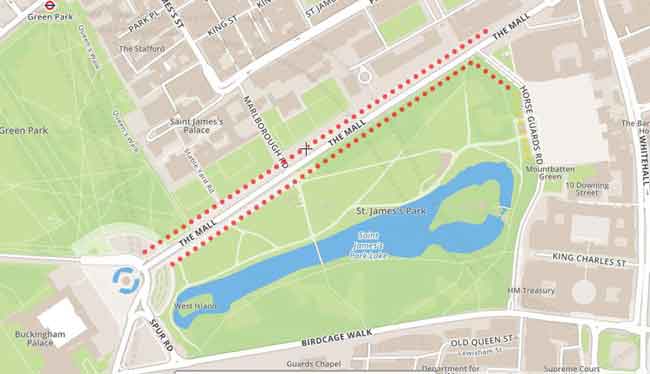 Where you can watch Trooping the Colour from the sidelines

What you can see from the sidelines in pictures.

Trooping The Colour commences on Horse Guards Parade at 10:00 and ends at 12:25.

Timings for the Reviews are the same as those for the King's Birthday Parade, with the exception of the presence of Her Majesty the King, the Gun Salute and Fly Past.

Go to qbp.army.mod.uk to purchase tickets for the Colonel's Review and the Major General's Review or to enter the ballot for Trooping the Colour (Queen's Birthday Parade)

HRH The Duke of Cambridge will take the salute
Tickets Prices are:

A public ballot is held for tickets to Trooping the Colour, which takes place in the presence of HM The Queen

Go to qbp.army.mod.uk to enter the ballot fortickets to Trooping the Colour (Queen's Birthday Parade).

The Queen's Birthday Parade - Morning Dress, Lounge Dress, Lounge Suit or Jacket and Trousers, equivalent for the ladies (no denim). Military personnel may wear Ceremonial Day or other Service equivalent.

Colonel's Review - Lounge Suit or Jacket and Trousers, equivalent for the ladies (no denim).

Hats are optional, but recommended in the case of hot weather.

Non compliance with the dress code may result in entry being refused.

Getting To Horse Guards