Visiting Changing the Guard With Children

Standing in the huge crowds in front of Buckingham Palace can make a visit to the Changing of the Guard ceremony a daunting experience for younger children.

However, kids can still see the Guards, hear the Bands play and avoid most of the crowds by following this suggestion.

IMPORTANT: The official start time for the Changing of the Guard ceremony is currently 11:00 hours.

Make your way to Wellington Barracks, at the Buckingham Palace end of Birdcage Walk, for about 10:15.

There you will see the New Guard forming up and being inspected, and then while they are waiting for their Regimental Colours the Band play a selection of music.

At 10:57 the New Guard led by a Regimental Band will march out of Wellington Barracks, and turn left for Buckingham Palace.

You can then follow them to the Palace, but to be fair it is difficult to see the troops, inside the railings surrounding the Palace forecourt, and not much happens for the next 30 minutes.

Personally, with children, I would skip the huge crowds at the Palace and head across St James's Park, over the bridge towards The Mall, which give you two options:

An alternative, especially for children who love horses, is to head for Horse Guards Parade where the King's Life Guard change, at 11:00 Monday - Saturday and at 10:00 on a Sunday.

There you will find smaller crowds and no railings between visitors and the men and horses taking part in the ceremony.

Combine this with a visit to the Household Cavalry Museum where kids big and small can dress up in the uniform of a Life Guard or Blues and Royals trooper as well as see the horses being worked on in their stables, through a glass partition, and you might just have found someone's ideal day out. 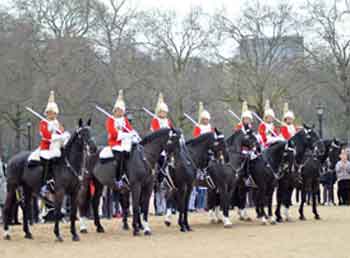 Getting to Wellington Barracks

Leave the station by the Broadway exit.

Walk along Birdcage Walk to the gates of Wellington Barracks.

Wellington Barracks to The Mall, (Junction with Marlborough Road

Walk diagonally across the Park to the footbridge over the lake.

Cross the footbridge, (good spot to get pictures of Buckingham Palace)

Follow the path, straight ahead, from the footbridge to The Mall

Click the map for details and pictures of what you will see.

The map and directions are available for download in PDF format

Should you need more information about visiting the Changing of the Guard ceremony with children please don't hesitate to get in touch.