These are some of the most frequently asked questions others have asked about the Changing of the Guard ceremonies, Ceremonial Events and the Palaces and Castles the Guards protect.

Click images to browse by topic or scroll down to questions and answers... 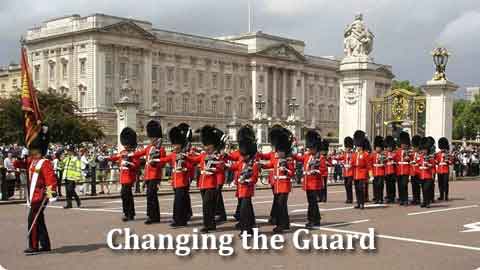 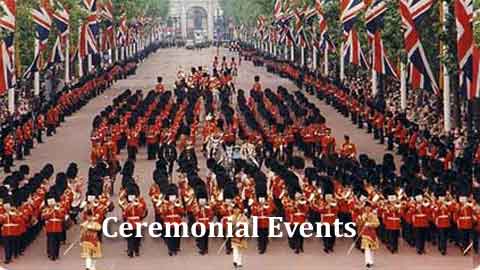 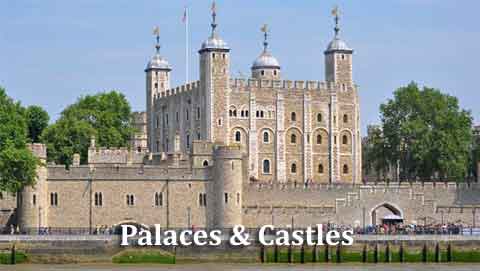 FAQ About Changing the Guard

Q. Does Changing the Guard at Buckingham Palace take place every day?

Changing the Guard at Buckingham Palace does not take place every day.
The current schedules are:

Always check the confirmed schedule, to avoid disappointment, as dates and times can change an on occasions the Guard Mount without music or ceremony.

Q. What time does Changing the Guard at Buckingham Palace start?

The official start time for Changing the Guard on the forecourt of Buckingham Palace is 11:00

Get there at least an hour before if you want to grab a good spot as it does get very busy, especially in the summer months.

Q. Do we need to buy tickets or book to watch the Changing of the Guard?

However, tickets are required to watch the Windsor Castle Guard change as the ceremony takes place within the precincts of the castle.

Q. When are the dates for Changing the Guard confirmed?

The dates and times are normally confirmed by the British Army around the middle of the preceding month.
i.e. August dates for Changing the Guard would be confirmed in July.

Q. Where can we watch the Changing of the Guard?

Most people head for Buckingham Palace to watch the Changing the Guard, but the ceremony actually takes place between three locations - Buckingham Palace, St. James's Palace and Wellington Barracks.

Our where to watch page provides more information and suggestions.

Q. Are there other Changing the Guard ceremonies in London?

Yes! The Queen's Life Guard change daily on Horse Guards Parade at 11:00 Monday to Saturday and at 10:00 on Sunday's.

There is also a Dismount Parade on the forecourt of Horse Guards at 16:00.

About The Queen's Life Guard... 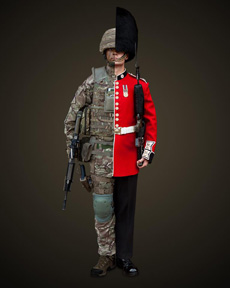 Although ceremonial duties are an important part of Army history and tradition, all the Foot Guards you see Changing the Guard at Buckingham Palace or Windsor Castle are first and foremost highly trained infantry soldiers who play an important part in military operations worldwide.

Many of the men you see on public duties will have recently been deployed overseas.

Q. How many guards are on duty at Buckingham Palace?

When Her Majesty The Queen is in residence you will see four sentries at the front of Buckingham Palace at other times there are two.

Q. What does a Full Mount / Dismount in the schedule mean

Q. Why are there no women standing guard at Buckingham Palace?

In the British Army, women were not permitted to serve in close combat units (that is cavalry and infantry).
However, this changed in 2018 and women are now able to apply to join infantry and cavalry units.

They already serve in combat support units, which includes artillery, engineers, air support, logistic support and other branches of the service.

In April 2007, the first women in the British Army served on detachments of the Queen's Guard when the King's Troop, Royal Horse Artillery took over the guard at Windsor Castle.

Q. What is The Queen's Guard

The Queen's Guard is the name given to the contingent of infantry responsible for guarding Buckingham Palace and St James's Palace (including Clarence House).

The Queen's Life Guard are the cavalry troops who stand guard at Horse Guards, the official entrance to Buckingham Palace and St. James's Palace.

Q. Is there a dedicated area for wheel chair users to watch the Changing of the Guard?

The Changing of the Guard takes place on the forecourt of Buckingham Palace and as such the only places to view the ceremony are from the public footpaths in front of the Palace railings or from the Victoria Memorial.

Sadly as these are public footpaths there are no dedicated areas for wheelchair users.

However, in my experience, the best way to get a good view is to talk to one of the very friendly policemen on duty in front of the Palace as they are very helpful and adept at getting wheel chair users and those who need assistance into a position by the gates where they can see the ceremony.

A second option, which is less crowded is to head for Horse Guards Parade where The Queen's Life Guard mount daily at 11:00 Monday to Saturday and 10:00 on Sundays.

The parade ground is a level surface, covered in gravel, and there are no railings between visitors and the men and horses mounting the guard.

Q. Can we get inside the railings to see the Changing of the Guard?

No, there is no public access to the forecourt of Buckingham Palace.

Q. How do the Guards get to and from Buckingham Palace?

The St. James Palace detachment of the Old Guard, normally led by a Band, march down the Mall to Buckingham Palace.
The New Guard, led by a Band, will march along Birdcage Walk, from Wellington Barracks to the Palace.

Maps, showing the routes 'The Guards' take before, during and after the Changing the Guard ceremony at Buckingham Palace, can be found here.

Q. Why do the Guards wear red jackets?

Bright colours provided a means of distinguishing friend from foe without significantly adding risk to the individual soldier as armies, in years gone by, formed up facing each other in ranks and columns on the battlefield where they engaged each other with volley fire, from muskets.

Some say the red coats, of the British troops, made it difficult for enemy spotters to count their strength because red, which is the hardest colour to see, merges into one at a distance.

While another popular myth was that blood would not show on the red tunics and demoralise the other troops.

Cost was probably the real reason as the dyeing process required, for red, involved only one stage and red pigment was readily available.

Scarlet tunics continued to be issued until the outbreak of the First World War in 1914.

The Brigade of Guards resumed wearing their scarlet dress uniforms in 1920 but for the remainder of the army red coats were only authorised for wear by Regimental Bands and Officers in mess dress.

Q. How much does the bearskin hat weigh?

Q. Why are there sentries on horseback in Whitehall?

Horse Guards, which faces Whitehall, is the official entrance to the Court of St James's and Buckingham Palace.

Since the Restoration of King Charles II in 1660 there have been Life Guards on duty at Horse Guards and you can see the Queen's Life Guard change daily on Horse Guards Parade.

Q. Can we see changing the guard while visiting the State Rooms at Buckingham Palace?

It is not possible to see the Changing of the Guard from the State Rooms or the gardens of Buckingham Palace.

The reason is that the State Apartments are mainly in the West wing of the Palace, while Changing the Guard takes place on the forecourt in front of the East wing.

With the average tour, of the State Rooms and gardens, lasting around two hours and first admissions at 09:45, the answer, if you want to do both on the same day, is to visit Changing the Guard first.

Q. Can we get tickets for the Queen's Birthday Parade?

Tickets in the seated stands, on Horse Guards Parade, for Trooping the Colour, The Major General's Review and The Colonel's Review are available to the public,

Due to demand tickets for The Queens Birthday Parade are allocated by ballot which you can enter between January and February.

Tickets to the Major General's Review and The Colonel's Review can be purchased online between January and February.

You can also see the parades from The Mall and from the edge of St James's Park facing Horse Guards Parade without tickets.

Q. We did not get tickets for Queen's Birthday Parade can you help?

Sorry to say the answer is no!

The only way is to get tickets to The Queen's Birthday Parade is to apply online between January and February.

The reason for this is that the demand for tickets normally exceeds the number of places available in the seated stands.

We understand it can be frustrating, but the Household Division adopted this policy as a way to give every applicant an equal chance.

Q. When is the next 21 gun salute in London?

Gun salutes are fired on the following Royal anniversaries:

Gun salutes are also fired to mark Royal births and when a visiting Head of State meets the Queen in London.

Learn more about Gun Salutes and how many rounds are fired depending on the occasion and firing point for the Guns.

Q. Where can we buy tickets for Beating Retreat?

Tickets for Beating Retreat are sold online or in person from the Guards Museum in Birdcage Walk.

Tickets for Beating Retreat 2020 will be on sale from December 2019.

Q. What route does the Queen take on her way to the State Opening of Parliament?

For the State Opening of Parliament The Queen travels by horse drawn carriage along the Royal Route from Buckingham Palace to the Palace of Westminster.

Find out about the State Opening of Parliament, including a map of the Royal Route.

Q. How many homes does The Queen own?

Her Majesty Queen Elizabeth II owns two homes, these are Balmoral Castle, in Scotland and Sandringham House, in Norfolk.

Buckingham Palace and Windsor Castle, where The Queen normally lives and works are owned by the nation.

During State Visits or ceremonial occasions the Castle is sometimes closed to the public.

Q. When is Buckingham Palace open to visitors?

The Summer Opening of the State Rooms at Buckingham Palace is from Saturday 18 July to Sunday 27 September in 2020.

Find out more about visiting Buckingham Palace and the Royal Mews.

Q. Can we see Changing the Guard while visiting the State Rooms at Buckingham Palace?

It is not possible to see Changing the Guard from the State Rooms or the gardens of Buckingham Palace.

The reason is that the State Apartments are mainly in the West wing of the Palace, while Changing the Guard takes place in the forecourt in front of the East wing.

With the average tour, of the State Rooms and gardens lasting around two hours and first admissions at 09:45, the answer, if you want to do both on the same day, is to visit Changing the Guard first.

Please feel free to get in touch if you cannot find the answer to your question above or would like more information about Changing the Guard.