Gun Salutes are the firing of guns or firearms as a sign of respect which is used to mark special occasions or as a military honour.

The practice of firing gun salutes has existed for centuries on both land and sea where warships would fire their cannons harmlessly out to sea, until the ammunition was spent, to signify their guns were empty and they had no hostile intentions.

By 1730, the Royal Navy was firing 21 gun salutes to mark certain anniversaries, which was to became the mandatory salute to the Royal family in the eighteenth century.

Although the 21-gun salute is the most commonly recognised, the number of rounds fired for any given salute varies depending on the occasion and rank of the person to whom honours are being rendered. 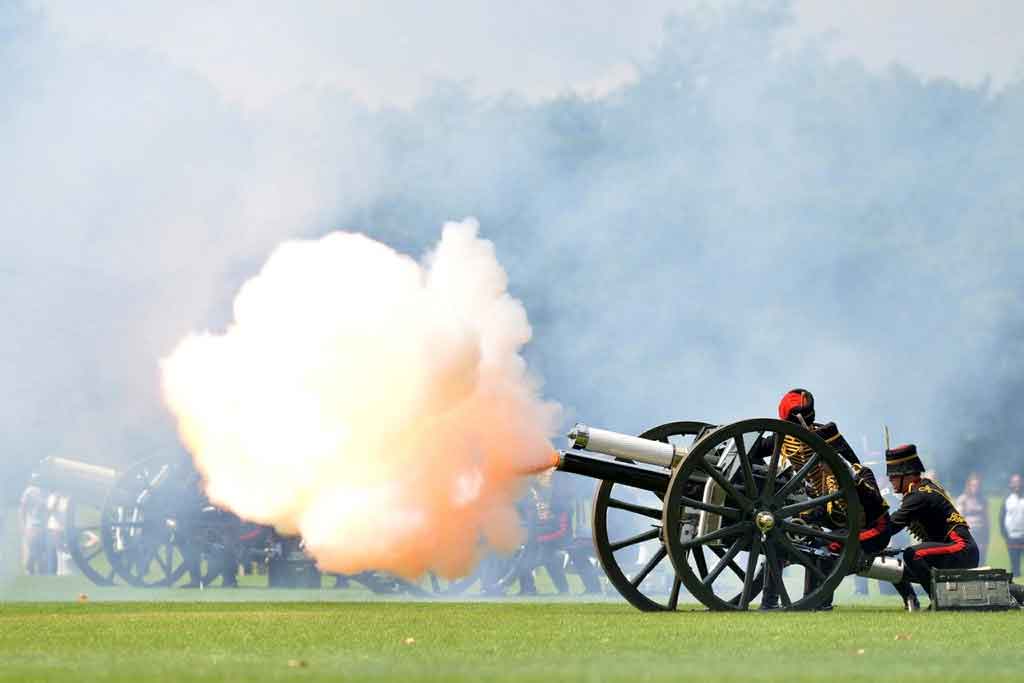 The number of rounds fired in a Royal salute depends on the place and occasion.

For the basic Royal salute 21 rounds are fired.

In Hyde Park an extra 20 rounds are fired because it is a Royal Park.

When Are Royal Salutes Fired

Gun salutes are fired on the following Royal anniversaries:

Gun salutes are also fired to mark Royal births and when a visiting Head of State meets the King in London, Windsor or Edinburgh.

Where Are Gun Salutes Fired

There are military saluting stations in London, Edinburgh Castle in Scotland, Cardiff and at Hillsborough Castle in Northern Ireland.

In London, salutes are fired in Hyde Park and at the Tower of London.

On State Visits, at the State Opening of Parliament and for The King's Birthday Parade, Gun Salutes are fired in Green Park.

Salutes in Hyde Park or Green Park are fired by The King's Troop, Royal Horse Artillery. The first round is fired at 12:00, or at 12:52 on The King's Official Birthday.

At the Tower of London, the Gun Salutes are fired by the Honourable Artillery Company at 13:00 hours. 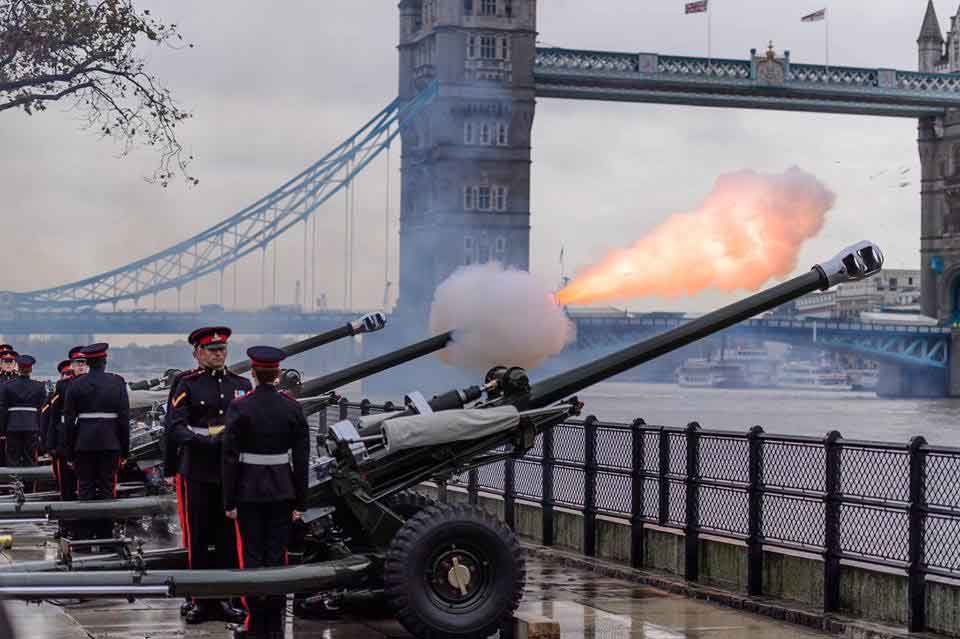 The honour of firing the salutes falls on to King's Troop Royal Horse Artillery.

Today the role of the King’s Troop is purely ceremonial. With a history dates back to 1793 with the formation of the Royal Horse Artillery.

The unit in its current form was created after the Second World War in 1946 by Royal Decree to have ‘A Mounted Battery' to fire salutes on State Occasions, dressed in the traditional style.

Kings Troop Royal Horse Artillery is the saluting battery of the Household Division, but was initially, known as The Riding Troop.

King George VI renamed it in his own honour by scratching out the word ‘Riding’ in the visitor’s book and replacing it with ‘King’s’.

As well as firing of Royal Salutes in London on State Occasions and Royal Anniversaries they provide a gun carriage and team of black horses for State and Military funerals.

It's a spectacular sight to see teams of horses, at full gallop, pulling the Troops six WW1 era thirteen-pounder Guns through a Royal Park to the firing point

There the Guns are quickly detached and while the Guns are being made ready the Band of the Royal Artillery play a selection of music to entertain the crowds.

The Guns continue to fire one by one at 10 second intervals until the required number of rounds have been expended.

Following this the Guns are limbered up and the Troop head back to their forward operationg base.

A Gun Salute in pictures.